Beautification Of The Streets Of Jaipur

In any modern city you will see  ugly places left over by modern flyovers or circles made to regulate traffic. They are inevitable by product of modernization. A consequence of a large number of people living together.It has become so that we do not notice the eyesores  any more.   For some time now the Government of Rajasthan and JDA (Jaipur Development Authority) have been going to great lengths  to beautify these eyesores. They  can not get rid of them but they can hide them a little. They can divert the attention of the public from something ugly to a thing of beauty, a work of art.  They have had the walls of flyover painted with traditional paintings, on  some mural have been put , on some mandanas have been painted. On the island made by the circles they have put up sculptures depicting rajasthani  culture.

The Peacock Garden in Malvea Nagar was one of the first space left over by the flyover to be beautified by having a garden developed and mandanas painted and carved stone chatris with sculptures of  life size  peacocks made of fiber installed.The peacock sculptures have been made by Mr.Raj Kumar Pandit who is based in Jaipur.

In continuation of this trend JDA has earmarked other circles to install sculptures at. The circles earmarked are near Lakshmi Mandir, near Rajmahal and in front of BJP office on Sardar Patel Marg. There will be 31 statue of metal made from a mixture of 8 metalas (Ashta  dhatu). The themes will be rajasthani dress, Jaipur festival and Holi dance. They will cost about rupees 1.5 crores.

These efforts are laudable. But people have defaced the painted walls where they could reach them and  there have been instances of statues being stolen. These statues are works of art and valuable public property. In my opinion the JDA  is  justified in guarding them. Maybe they ought  to  have them insured for what they are,works of art, and to put the onus of their safety on the insurance company.The cost  will be justified too  as works of art appreciate over time. 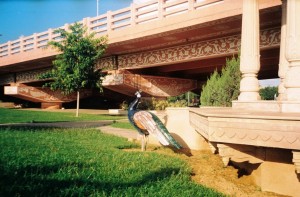 The Peacock sculpture, Chatri & the mandanas painted on the flyover.

One response to “Beautification Of The Streets Of Jaipur”