Gangaur is one of the most important festivals of Rajasthan.The word, Gangaur, is derived from joining the two words ‘Gan’ meaning Lord Shiva and’Gauri’ meaning Goddess Parvati, his consort.

As per lore, it is believed that Gangaur is celebrated ever since  Goddess Parvati returned to her father’s home first time after her marriage to Lord Shiv &  her friends welcomed her home.

This is a festival of the unmarried girls and  married women where the girls celebrate the festival to gain a worthy husband & wish for his long life & the  married women wish for a  long life for their  husbands.
The rituals for this festival start on the day of the Holi dahan ( day before the Holi, the festival of colors). When ashes are collected from the Holi Fire to plant seeds of wheat and barley in it.
During the next sixteen days 16  Goddesses are worshiped. And on the 3rd day of Navratra ( new year according the Indian Vikram samvat Calendar) , Gangaur festival is held. When the Idol of Gauri  is taken out in a procession accompanied by horses, elephants, camel carts and brass bands playing maudlin tunes.It is said, in Jaipur, in olden times the idol of Gauri was accompanied with the idol of her husband,Isar. But one year ruler of Kishangarh state took it away with him forcefully & since then only the idol of Gauri is taken out in procession.

What festival worth its name does not have a sweet associated with it? The traditional sweet of this festival is ‘Ghevar‘. The sweet shops of Jaipur make different varieties of ‘Ghevar’ and the people of Jaipur consume them in large quantities.

For more than 257 years,  Helakhyal sangeet dangal is held on this occasion in Lalsot near Dausa. This is when the performing  parties educated & inform the public about the societal mores  & also inform the  administration about their displeasure with current policies.

A Labour of Love! 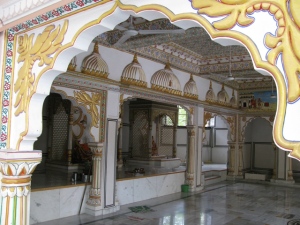 According to the information passed down over the years  the  Pujari ji of  The Hanuman Temple in Dhuleshwar Garden,C-Scheme, believes it to be some 500 years old. He says he   remembers it as a big chabutra with a neem tree, a room for the idol and a kitchen. Under the soothing  shadow of a huge peepul tree and the grace of the Gods worshiped here  and the patronage of the devotees  this temple has grown into a thing of beauty and not just only  a place of worship. The building has been newly done up with marble flooring and marble platform around the idols. Idols are surrounded by carved marble Jalis. Besides all this a  local painter, a Hanuman devotee,  has painted the whole building of the Temple with very pleasing and intricate murals. There are  gold, red, green, white, pink and blue colors making intricate flowers and petals on the roof, pillars, windows of the temple. The artist has also depicted in wall paintings scenes from Ramayan.   There is also a jhoomar  in the center of the ceiling illuminating the whole room and the lovingly done up art work. Idols of Shri Ram, Sita Ji and Lakshman Ji and the Idols of Shivji  and Parvati ji and a Shiv ling are also there in the Temple.

Some other Hanuman Temples of note in Jaipur are:

The Chitthi wale Hanuman Ji  on Sardar Patel Marg, Opposite the PMG office.

There are Two Temples of Hanumanji opposite each other in the entrance to the  Johri Bazar .

There is the Kala Hanuman Mandir Near the now defunct Ram Praksh Cinema Hall.

There is another very old Hanuman Mandir opposite the Ganesh Mandir on Moti Doongri near Birla Mandir.

In this small town near Dausa, about 90 km from Jaipur- Shunga relics related to the Buddhist faith have been found. ASI has cordoned off, behind barbed wire, five feet high pillars-having square base and octagonal center.These pillars were found outside the present local Dak Bungalow.

For more than 257 years now,every year on the second day of Gangaur, Hella Khayal Sangeet Dangals are held in Lalsot. Every year thousands attend the event.Relatives of the villagers come from all over India. Consequently there is a Deepawali like atmosphere during these two days.

Presently about six groups are performing the art through which they inform the public about current affairs and issues, put forth their problems to government officers ,or comment on social, political and economic issues.(In old days, religious and folk themes were popular with the public.)The program is performed according to the Turra Kalangi Khayal singing of Karauli and Sawaimadhopur area.

Every year after Holi ( The festival of Colors),Gangaur is celebrated with great fanfare in praise of the Goddess Gauri.She is the goddess of purity and of unmarried girls.She is generally considered to be the unmarried Parvati who underwent great penance to attain the glory of marrying Shiva.