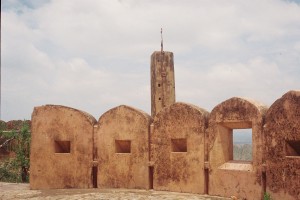 One of the three forts which have stood sentinel over  the city of Amber & Jaipur ,  Jaigarh has been standing proud since the 11th century when Kakil Deo laid its foundation. The fort has been added to and brought to its present state over the years by the successive Kachawaha rulers of Amber and Jaipur. Jaigarh is built atop the aravali hills at a height of 602 meters above sea level.From North to South it stretches for 3 km while it  has a width of about 1 km. To guard this vast region from intruders there used to be  27 maned check posts. Jaigarh is 15 km from Jaipur thru the Doongar Gate and only 1.5 km from Amber thru the Awani Gate which connects the Amber fort with Jaigarh by a steep road paved with stones. One more Gate known as the Sagari Gate is, now a days, used only on the day following Deepawali when anakoot is celebrated here and on the eve of Bhairav Asthmi.

The Fort had an elaborate Palace Complex, the Lalit Mandir, for the summer retreat of the Maharajas and Subhat Niwas where he addressed the soldiers and Khilbati Niwas where he met with the generals and Lakshmi Vilas the royal drawing room and the puppet show room and 2  Dining halls and kitchen and Garden  and garden house known as Aram Mandir and ladies Quarters known as  Vilas Mandir and Surya Mandir was used for the Gun foundry. There was even a small castle inside the Fort which was used as the armoury  of Jaigarh. Two temples dedicated to Ram Harihar and Kal Bhairava are in  the Jaigarh where most hindu festivals are celebrated. 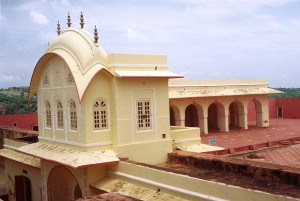 The rulers of Jaigarh took  great effort to harvest water for the people of the fort.They had five big tanks where rain water  was stored  after being lifted from the Sagar lake. For 4 kms around the Fort they had pucca canals made which brought the water of first couple of rains from the catchment areas  to one of the tanks for the use of the horses etc. Some of these tanks are in use even today by the staff running the fort for their drinking water supply.